You are here: Home / Analysis / France vs. Turkey: the showdown in the Mediterranean 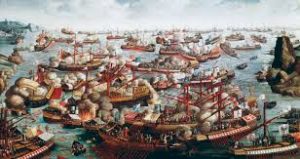 French President Emmanuel Macron has thrusted France into a leadership role by deciding to buttress Greek and Cypriot interests in the Mediterranean. Laying out his rationale in an August 29 speech, he depicted a Mediterranean beseeched by conflicts. He included clashes from Syria to Libya, disputes over energy, the never-ending peace process, failed states like Lebanon and intense demographic pressures, like reported by nationalinterest.org.

More worryingly for him, new developments are exacerbating the current state of affairs. These include the retreat of the United States and general European indifference. But there is also the reemergence of two great powers, Russia and Turkey, both of which arrive with considerable historical baggage. In Turkey, Macron perceives a dangerous revisionist power imbued with a sort of “fantasy” regarding its past history. He also has upped the pressure at the MED7 Corsica summit last week by encouraging Europeans to stand firm against Ankara.

This is because Ankara has deployed an armada of naval vessels that accompany its seismic research ships in pursuit of hydrocarbon resources and influence in the Eastern Mediterranean. Turkish vessels have crossed into the Exclusive Economic Zones (EEZ) of both Greece and Cyprus challenging their sovereignty. The Turks have made it clear that they are willing to use force if necessary, while carrying out these missions.

Greece and Cyprus do not have the military wherewithal to stop the Turks and this is where Macron comes in. Alarmed by the challenges to the sovereignty of two European Union members, Macron has deployed the French navy’s considerable assets to support both countries. He has said that he is laying down a red line intended to deter Ankara. In what perhaps is a first of its kind, he rebuked a fellow North Atlantic Treaty Organization member by pointedly maintaining that the Turkish President Recep Tayyip Erdogan and the Turks respect only actions and not words.

Erdogan was quick to respond by accusing the French leader and others of being greedy and oblivious to the dire consequences of taking the Turks on.

At the heart of the dispute is Turkey’s decision to explore for hydrocarbon resources in waters deemed to be within the Greek and Cypriot EEZs. The EEZ is a legal designation, together with the concepts of continental shelf and territorial limits, agreed to by the signatories to the 1982 United Nations Law of the Sea Convention or UNCLOS. Accordingly, coastal states can claim up to a 200 miles area as their EEZ where they have the right to exploit existing resources. The problem is that the Mediterranean is a semi-closed sea where countries’ respective EEZs bump into each other. Turkey, while not a signatory to UNCLOS, has decided to interpret its provisions differently. It does not recognize the fact that islands also have a right to an EEZ and hence challenge much of Greece and Cyprus’s EEZ designations.

Turkey does have a valid issue. The hundreds of Greek islands that dot the Aegean Sea, some as close as a mile to the Turkish coast, effectively confine Turkish interests to a very narrow strip. Turkey’s answer is to assert that these islands are part of its continental shelf and hence ineligible to claim their own EEZs. Notwithstanding Turkish proclamations, the status of the Aegean deserves to be adjudicated. The Greek government has made it clear that it is willing to negotiate provided Ankara stops threatening them and remove its naval assets. Cyprus, however, is altogether another matter: Turkey has occupied some 40% of the island since 1974 and refuses to recognize Cyprus, making negotiations between Nicosia and Ankara unlikely in the near future.

The French have also been angered by Turkish interference in Libya in what they see an attempt by Erdogan to extend his influence in an area that is the soft underbelly of Europe. Last month, French and Turkish naval vessels were involved in a tense altercation off the Libyan coast. Turkey also concluded an EEZ agreement of its own with the Libyan government designed to cut the Mediterranean into two with the possible intention of preventing Cyprus, Egypt and Israel from exporting natural gas to Europe through a pipeline.

Macron’s forceful intervention may be having its desired effect. He is pressing the Europeans to take a stand as German efforts at mediation have not had much impact. European leaders will consider imposing sanctions on Turkey in their upcoming September 24 summit. Erdogan, in messages to the outside world, has of late softened his stand suggesting that he is open to negotiations with all parties except Cyprus which Turkey does not recognize. More importantly, he has removed Oruç Reis, the exploratory vessel from the Aegean and sent it back to port. This Turkish decision to dial down tensions taken in anticipation of the pending European Union Summit was also made all the more necessary by Moody’s unprecedented downgrade of Turkish debt deeper into junk category. In justifying its decision, Moody’s pointed to not just the government’s poor steering of the economy but also to the rising tensions, including in the Eastern Mediterranean, resulting from Turkey’s foreign policy stances.

Yet at home, Erdogan’s rhetoric remains rancorous; he is threatening the French as well as all the others and using the Eastern Mediterranean crisis to inflame nationalist sentiments. Facing a series of domestic setbacks, he faces the unenviable task of figuring how to climb down from the escalation ladder.

The jury may still be out on Macron’s step into the leadership vacuum; Turks have backed down for the moment. Back in 1996, when Greece and Turkey almost went to war over two nondescript rocks in the Aegean, Washington had stepped in to diffuse the situation. Today, not only is Washington absent, but President Trump is also seen as having emboldened Erdogan. In risking a showdown with Erdogan, Macron at least deserves recognition for trying.