Real passports with a false identity are ‘very hard to detect.’ 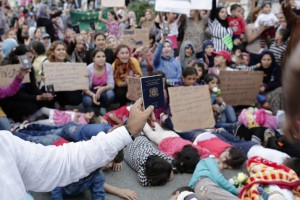 The EU must do more to detect false Syrian passports such as those used by two of the suicide bombers at the Stade de France, according to French Interior Minister Bernard Cazeneuve.

In a letter to the European Commission Monday, Cazeneuve said the November 13 attacks “unfortunately showed that some terrorists are trying to get into our countries and commit criminal acts by mixing in with the flow of migrants and refugees.”

In response, he wants better equipment to compare travel documents at the EU’s external borders (particularly Greece and Italy) against an Interpol database of lost or stolen passports.

Cazeneuve said two of the Stade de France bombers showed false Syrian passports as they entered the EU in Greece on October 3. “These ‘real-fake’ passports are very hard to detect,” Cazeneuve said, explaining they may be made by filling in blank documents seized from administrative facilities in areas overrun by ISIL, or by altering passports of dead Syrian soldiers or civilians.