You are here: Home / Europe / France to press for extradition of Palestinian mastermind behind Jewish restaurant attack 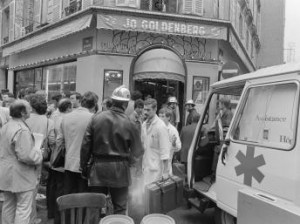 The suspected mastermind of an attack on a Paris Jewish restaurant in 1982 that left six people dead and 22 injured has been arrested, officials in Amman and Paris confirmed on Wednesday.

The man, Zuhair Mohammed Hassan Khalid al-Abbasi, 62, was taken into custody on June 1. French authorities are set to seek his extradition.

He is suspected of having a commanding role in the attack, that left six people dead and twenty-two people injured.

In 1982, Chez Jo Goldberg, a Jewish deli in Paris, located on the Rue de Rosiers in the heart of the Marais- a vibrant Jewish hub- was attacked by two terrorists wielding grenades and machine guns.

One of the attackers threw a grenade into the restaurant while others fired guns at customers; they then fled on foot.

The assault was believed to have been planned and carried out by members of the Abu Nidal Organization, an international Palestinian terrorist group, and took place when Arafat and the PLO were under Israeli siege in Beirut.

At the time, the attack was considered one of the most lethal anti-Semitic attacks in France since the end of World War II.

For years, France has struggled to bring the three men to justice. It wasn’t until 2007 when revered counter-terror judge Marc Trevedic took over the case, did things start to improve.

Especially when Trevedic began working with French intelligence services, who were able to get confessions from members of the Abu Nidal Organization. The latter directly implicated Abassi as being the mastermind of the Jewish deli attack.

Abbasi was apprehended by Jordanian intelligence and police officers in Zarqa on June 1, a town that lies about 15 miles northeast of Amman. It has been known in recent years as a breeding ground for terrorism.

The suspect is currently out on bail, but is barred from traveling. French authorities are already moving to extradite him to France for trial, but are awaiting for the relevant documents to be translated.

It’s not sure how long it will take for Jordan authorities to comply with the extradition request. Meanwhile, Palestine and Norway, where the remaining suspects are hiding have so far not responded to France’s request.