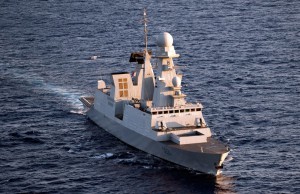 France is to deploy a naval frigate to  try to stop people smugglers in the Mediterranean, the defence ministry announced. The action is part of the European Union’s  EU NavFor Med naval operation against human traffickers.

“The Mediterranean has for too long offered the vision of a sea of death for people driven out of their homes by instabliity,” French Defence Minister Jean-Yves Le Drian said on Monday.

EU NavFor Med was launched last June but was limited to intelligence-gathering until Monday when member states agreed to move on to the next phase.

The enlarged mission will now have a fifth vessel with the French frigate.

The third phase, not agreed yet, will involve military action and “interception in deep waters”, according to Le Drian.

France has dismantled 177 networks of smugglers since the beginning of this year, meaning “about 3,300 people”, French Interior minister Bernard Cazeneuve said at a meeting in Brussels Monday.

More than 2,000 people died in 2015 while trying to reach Europe via the Mediterranean according to the International Organisation for Migration.