You are here: Home / Europe / France ‘to beef up’ rural security over terror fears 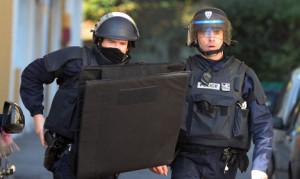 Extra police units are planned to be rolled out across the country in a bid to be more effective in stopping potential terror attacks outside of the cities, reports say.

Interior Minister Bernard Cazeneuve wants French police to be able to respond to a terror attack within 20 minutes – no matter where in France the attack may occur.
He said that this would mean setting up special units all over the country, reported Le Figaro newspaper on Friday.
“Every French person should have the same level of safety, no matter where they live in the country,” he said.
Indeed, Cazeneuve had already warned earlier this month that there was a terror threat “in the whole country, not just in the Paris region”.
His plans would see 150 squads of police officers – both from the anti-criminality brigade (BAC) and the Surveillance and Intervention Platoons (PSIG) – stationed in key areas of the French countryside.
The officers would be armed with Heckler & Koch G36 assault rifles (pictured below), each capable of firing 750 rounds a minute.
The weapons have the capacity to shoot through bullet proof vests, such as those worn by the Kouachi brothers in the Paris attacks from January last year.
Police will also be equipped with bulletproof shields, like the ones that officers took into the Bataclan concert hall during the November attacks last year.
Pictured below is one of the shields that was used by elite Search and Intervention Brigade (BRI) commandos at the time.
The police in the French countryside would be tasked with stopping or at least slowing terrorists down while the elite anti-terror forces were on the way.
The plan will come with an estimated cost of €10 million for vehicles, and €6.6 million for staffing and materials.
France remains under a nationwide state of emergency, which was put in place when terrorists armed with Kalashnikovs opened fire on Parisians in November. They killed 130 people, most of whom were watching a show at the Bataclan concert hall.
thelocal.fr