‘I am denouncing a manipulation that undermines the local police,’ French official says 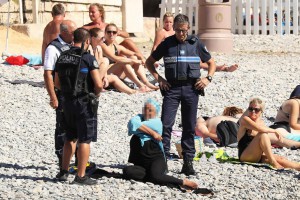 A French politician is threatening legal action against social media users for sharing photos of police enforcing a ban on the burkini.

Christian Estrosi, the President of Provence-Alpes-Côte d’Azur, a region where the full body swimwear is prohibited, said official complaints had been filed about the distribution of the pictures of the police officers. He added the officials were just “doing their job”.

Photographs of one incident where at least four armed police officers confronted a woman on a beach, reportedly fined her and made her remove clothing attracted widespread criticism on social media.

Another video circulated showed a woman being forced from the water by a policeman, although she was wearing a hijab and not a burkini.

Many have said the burkini ban is an act ofislamophobia, misogyny and an attack on freedom of expression.

In response to the backlash, the right-wing politician said in a statement: “I am denouncing what seems like a manipulation that undermines the local police, and puts the officers at risk.

“Already, complaints were filed to prosecute those who spread the photographs of our municipal police officers and those uttering threats against them on social networks,” he said.

In the days since the controversial ban came into force, 24 women have been fined.

The former Mayor of Nice has been a vocal supporter of the Burkini ban, which was implemented after an attack on the city on Bastille day that killed 84 people.

In a statement after the law was introduced in many French towns, Mr Estrosi said the wearing of the modest clothing “undermines” French values.