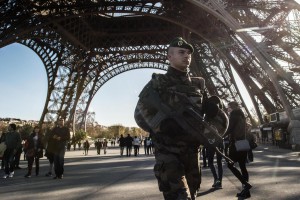 At least three terror suspects with advanced plans to attack Francehave been arrested so far this month as security services react to a wave of Isis inspired attacks.

They were among seven suspects detained in recent weeks as the country’s General Directorate for Internal Security (DGSI) continues to us powers under France’s extended state of emergency to prevent further atrocities.

Bernard Cazeneuve, the French interior minister, said the number of people arrested over terror offences in the first six months of this year was greater than the entire total for 2015.

“The work of police and the intelligence services has achieved significant results  in the war against terrorism,” he added in a speech on Tuesday.

Mr Cazeneuve said France was also enacting measures to track and intercept jihadists returning from abroad and to improve checks on the outskirts of the Schengen passport-free travel area.

He and Manuel Valls, the Prime Minister, were unveiling a new security initiative in co-operation with the German government to strengthen Europe’s exterior boundaries, improve information sharing and create a new border force.

France wants to continue the intensified searches and controls introduced at border crossings within the EU that were brought in following Isis’ Paris attacks in November.

Investigations showed most of the militants had fought for the so-called Islamic State in Syria and returned after their training, with some exploiting refugee routes into Europe using fake passports.

Suspected attacker Salah Abdeslam easily crossed the Belgian border within hours of the 13 November massacres, while a linked cell of jihadists appeared to have no trouble travelling around the EU as they plotted the Brussels attacks.

Mr Cazeneuve called for the creation of a European equivalent of the Electronic System for Travel Authorisation (Esta), which is required by the US for visitors arriving from countries like the UK that are part of its visa waiver programme.

He also raised the possibility of new legislation to force the owners of encrypted messaging applications, particularly Telegram, to force them to remove “illegal” content and hand communications over to security services.

“Exchanges carried out via applications like Telegram most be identified and used in the course of judicial proceedings,” Mr Cazeneuve said.

“We propose that the EU Commission studies the possibility of a legislative act introducing rights and obligations for operators to force them to remove illicit content or decrypt messages as part of investigations, whether or not they are based in Europe.”

The proposals are due to be discussed at a meeting of the 27 heads of EU states on 16 September, which Theresa May is due to attend.

French security services are currently using enhanced powers under the country’s state of emergency, which the National Assembly voted to extend for six months following the Nice attack last month.