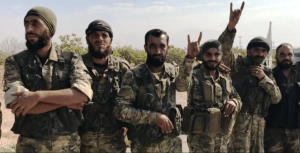 France expects Turkey to withdraw Syrian mercenaries recruited for Azerbaijan during the recent war in Nagorno-Karabakh, a senior French official visiting Armenia said according to massispost.com.

“French President Emmanuel Macron was the first to call things what they are and state that Turkey transported Syrian mercenaries from the Turkish city of Gaziantep to Nagorno-Karabakh,” Jean-Baptiste Lemoyne, a secretary of state at the French Foreign Ministry, told a news conference in Yerevan held at the end of his two-day visit.

“France expects concrete actions from Turkey so that Turkey removes the mercenaries from the region,” he said. “Paris is going to discuss with its European partners sanctions against Turkey.”

France has been pressing the European Union to impose the sanctions because of Turkish actions in the eastern Mediterranean where Turkey and EU members Greece and Cyprus are locked in a dispute over natural gas rights. Relations between Ankara and Paris have been increasingly tense in recent months.

Macron accused Turkey of recruiting jihadist fighters from Syria for the Azerbaijani army shortly after the outbreak of large-scale hostilities in and around Karabakh on September 27.

Russia also expressed serious concern in the following weeks about the deployment of “terrorists and mercenaries” from Syria and Libya in the Karabakh conflict zone. Russian President Vladimir Putin and his foreign and defense ministers repeatedly raised the matter with their Turkish counterparts.

Multiple reports by Western media quoted members of Islamist rebel groups in areas of northern Syria under Turkish control as saying in late September and October that they are deploying to Azerbaijan in coordination with the Turkish government. Armenia has portrayed those reports as further proof of Turkey’s direct involvement in the war stopped by a Russian-brokered ceasefire on November 10.

Karabakh army has captured two Syrian Jihadist fighters during the fighting. Both men are now prosecuted in Armenia on relevant charges.