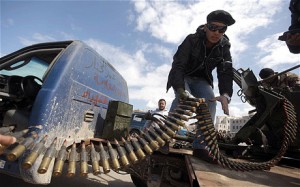 The French government is preparing for military action against the Islamic State in Libya in the first half of 2016 and is seeking to form a coalition with European allies, Le Figaro reported on Wednesday, citing unidentified sources close to the Defense Ministry and the army’s command.

Italy would be ready to participate in a coalition to fight IS in Libya, while France is in talks with the U.K., Gulf States and North African countries including Algeria, Tunisia and Egypt, the newspaper said.