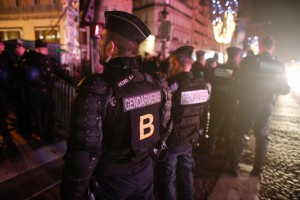 The French government wants to widen police powers significantly to facilitate vehicle searches and nighttime raids while easing restrictions on the firing of weapons, according to a draft bill seen by Le Monde.

The draft, sent to the Supreme Court for review in December, laid out plans to “perennially strengthen the tools and resources at the disposal of administrative and judicial authorities, outside the temporary legal framework implemented under the state of emergency,” according to Le Monde.

Under the state of emergency put into place following the November 13 terrorist attacks in Paris, police have made extensive use of their powers. More than 3,000 raids have been conducted on homes, places of business and mosques suspected of links to terrorism, while hundreds of people have been placed under house arrest.

If passed, the bill would make many of those exceptional powers, which are due to expire on February 26, permanent. These include looser restrictions on searching and detaining suspected terrorists, including minors; the ability to carry out nighttime raids; and looser constraints on firing weapons.

The new bill is likely to stoke a debate about respect for civil liberties in France under the state of emergency.

President François Hollande has faced sharp criticism from both left- and right-wing opponents over his decision to maintain plans to strip French citizenship from convicted terrorists with dual nationality.

From the left, the Socialist president is accused of perverting the constitution’s principle of strict equality before the law, while right-wing critics say that the measure — largely symbolic, by the admission of Prime Minister Manuel Valls himself — is a political maneuver aimed at cornering the far-right.

Marine Le Pen, leader of the far-right National Front, has protested that Hollande stole the idea for nationality stripping from her program.

In reality, the measure has a long historical precedent: First used in 1848, it punished slave traders who ignored the decree abolishing the practice. It came back again after World War I, targeting French people born in enemy countries; then it reappeared again, massively and ignominiously, under the Vichy regime, which used it against thousands of opponents.

Meanwhile Le Pen, who failed to win a single region in local elections last December, is left with little to say on domestic security, beyond habitual calls to close France’s borders.

The far-right chief faces an uphill struggle to widen her appeal ahead of presidential elections in 2017. Despite her party’s popularity, Le Pen has struggled to seduce middle-class and wealthy voters who typically side with Nicolas Sarkozy’s center-right Les Républicains party, and who balk at her suggestion of withdrawing from the eurozone.

French police currently have strong restrictions on the use of force, while “Gendarmes” enjoy more leeway. National and municipal police may use their weapons only for reasons of “legitimate defense” of themselves or another person, and lethal force can only be used to protect a person, not a property.

The new bill includes somewhat less restrictive language. While use of force would be allowed if “absolutely necessary,” the draft bill cited by Le Monde says it would also be permitted to “subdue” someone who aimed to commit one or more homicides, or if there was a “serious reason” to believe that a succession of crimes was being committed.

Also, when carrying out raids, police would no longer have to wait until 6 a.m. to enter a suspect’s dwelling. In terrorism cases, raids could be conducted during a preliminary investigation — a first stage of evidence-gathering that can, but does not always, lead to an indictment.

“A risk to life or physical integrity” would be enough to justify a night raid under the new bill, Le Monde reported.

Police would also be free to search the bags and vehicles, and check IDs, of anyone suspected of terrorist activity — simply at the request of a prefect, versus that of an investigating magistrate, as is currently the case.

Furthermore, the bill would allow suspects in terrorism cases to be held without the presence of a lawyer.

Finally, house arrests and administrative controls for people returning from Iraq or Syria could also be justified under the bill if a returnee is suspected of having visited terrorist groups abroad.