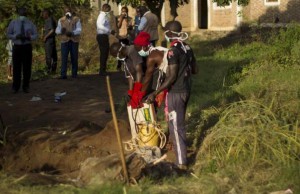 The United Nations Security Council could vote as early as Friday on a French-drafted resolution that would request options for a U.N. police deployment to Burundi, diplomats said, but it was not clear if it had the support of the United States.

Council diplomats said on condition of anonymity that the United States, which has veto power as a permanent member of the council, was unhappy with vague language that asks the U.N. to work with the government of Burundi in the areas of disarmament, security and rule of law.

The United States is concerned about linking the United Nations efforts to broker peace in Burundi with the country’s security forces, who have been accused of human rights abuses, one council diplomat said.

The United Nations said in January it has documented cases of Burundi’s security forces gang-raping women during searches of opposition supporters’ houses and heard witness testimony of mass graves.

France has asked China, the Security Council president for April, to schedule a vote on the draft resolution on Friday.

Burundi has been embroiled in political violence since President Pierre Nkurunziza said last April he would seek a third term, which his opponents said was illegal. Since then, at least 439 people have been killed and more than 250,000 have fled.

The United Nations is under growing pressure to show it can halt the bloodshed in Burundi more than two decades after the 1994 genocide of ethnic Tutsis and moderate Hutus by the Hutu majority in neighboring Rwanda. Rwanda and Burundi have a similar ethnic makeup.

In January, the 15-member Security Council made its second visit to the landlocked state in less than a year, where fears of an ethnic war have also led to an economic crisis. U.N. Secretary-General Ban Ki-moon also visited in February.

The draft council resolution would ask Ban, in consultation with the Burundi government and coordination with the African Union, to present options within 15 days for the deployment of a U.N. police contribution to increase U.N. capacity “to monitor the security situation, promote the respect of human rights and advance rule of law.”

Russia’s Deputy U.N. Ambassador Petr Iliichev said there was no need to send U.N. police units to do the work of the Burundian police, but “any kind of assistance that the U.N. can provide will be more than welcome.”

Burundi’s U.N. ambassador, Albert Shingiro, said in February that any potential U.N. help would be limited to civilian assistance in the development, or “capacity building,” of the police and monitoring the border with Rwanda.