You are here: Home / Europe / France says ready to keep troops in W.Africa for as long as needed 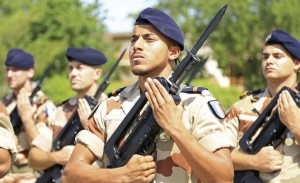 France appeared on Wednesday to accept that it would need to keep thousands of troops in Africa’s Sahel region for an indefinite period given the ongoing instability and preponderance of Islamist militants.

The region, a politically fragile area whose remote desert spaces spanning from Mauritania in the west to Sudan in the east host a medley of jihadist groups, is seen as vulnerable to further attacks after strikes on soft targets in Burkina Faso and Ivory Coast earlier this year.

That has been brought further to light after a spike in violence in northern Mali, where France intervened three years ago to drive out al Qaeda-linked militants who hijacked a rebellion in 2012 by ethnic Tuaregs and attempted to take control of the central government in Bamako.

Speaking to lawmakers, Foreign Minister Jean-Marc Ayrault sought to reassure regional allies that Paris would not abandon them despite pressure on its military that has seen it increase operations in the Middle East, but also on home soil after a series of Islamist attacks.

“France remains committed as long as the jihadist threat continues to weigh on the future of these countries,” Ayrault said at a parliamentary debate on his country’s overseas operations.

“What message would we be sending if we envisaged a reduction of our effort? We do not have the right to abandon our African brothers at the exact moment when they need us the most to consolidate the fragile balances,” he said.

After sending troops to Mali, the former colonial power has since spread some 4,000 soldiers across the region to hunt down Islamists, while United Nations’ peacekeepers have been deployed to ensure Mali’s stability.

However, the U.N.’s forces have lacked equipment and resources making a political settlement between Tuaregs and the government in Mali increasingly fragile and paving the way for Islamists and traffickers to exploit a void in the north of the country.

“We know it will be long and difficult (because) the national reconciliation process is taking time to come into effect, securing the north is slow and terrorist groups continue to destabilise the region by carrying out attacks on Mali’s borders at the entrances to other countries like Niger and Ivory Coast,” Ayrault said.

France will next week seek to discuss Mali when it hosts a ministerial meeting on U.N. peacekeeping operations in French-speaking countries to see how to beef up and improve their efficiency.