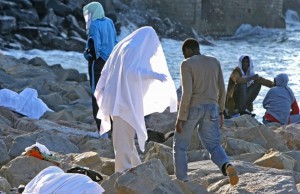 French Interior Minister Bernard Cazeneuve hit back at Italy over responsibility for migrants on Monday, saying it must abide by European asylum rules and that France would continue to turn them back.

Hundreds of African migrants are stranded at a border crossing in northern Italy, and Italian Prime Minister Matteo Renzi on Sunday called for a change to regulations.

Speaking to a French TV station, Cazeneuve said Italy had to implement the so-called Dublin regulations, which assign most asylum seekers to the EU country they first enter.

“The Dublin rules must be respected. When migrants arrive in France that have been through Italy and registered there, the European law applies and that means they must be returned to Italy,” he told BFM TV.

“They do not have the right to pass and must be handled by Italy.”

Under the Schengen treaty, free cross-border movement is normally allowed within most of the European Union, but France and other EU partners such as Austria have stepped up controls on migrants from Italy, turning back hundreds and leaving growing numbers camped out in railway stations in Rome and Milan.

Cazeneuve said about 15,000 migrants had been turned back in 2014 and that number had risen significantly in 2015 after he had ordered economic migrants to be returned to the country where they had arrived.

“This needs to be done to ensure the welcome of those who are refugees,” Cazeneuve said. “There needs to be a firm policy.”

He said Italy had to accept an EU concept of “hotspot” centers where illegal economic migrants and asylum seekers could be set apart, registered and then redistributed across Europe.

Renzi said he would discuss the issue with French President Francois Hollande and British Prime Minister David Cameron when they visit Italy this week.

The crisis has become one of the most pressing issues facing Renzi’s center-left led government, after the surge in support for the anti-immigration Northern League in last month’s regional elections.