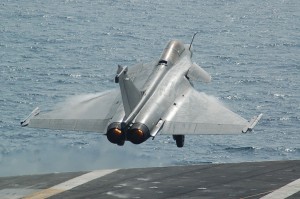 Influential members of the Saudi Arabian government believe that the United States—the kingdom’s most valuable strategic ally since 1945—has abandoned Riyadh on a host of regional issues, most notably Iran’s nuclear program. As the Saudis respond by seeking to enhance their political and economic relations with powers other than the United States., France sees an opportunity to supplant Washington as Riyadh’s closest ally. While it remains unlikely that Paris will entirely replace Washington as Saudi Arabia’s most important ally, France can compete with the United States to become the kingdom’s top supplier of advanced military technology in the future.

Following the interim nuclear agreement of November 2013, French officials joined their Saudi counterparts in questioning whether Tehran could be trusted, and Iran’s commitment to ending its ability to build a nuclear bomb. While it remains to be seen how the recently signed Iranian nuclear agreement will impact Paris and Tehran’s relationship, of all parties in the P5+1 talks, France is said to have taken the toughest stance against the Iranian nuclear program, which has not gone unnoticed in Riyadh.

French Arms Deals in the Gulf

Although France’s economy barely maintains positive GDP growth rates, its arms industry is booming. As the world’s fourth largest arms exporter (behind the United States, Russia, and China), France sold nearly double the amount of arms in the first five months of 2015 (more than $16 billion) than in all of 2014. From 2010 to 2014, 38 percent of French arms exports went to the Middle East, making it the most important region for the country’s arms industry (30 percent went to Asia; 13 percent to Europe; 11 percent to North and South America; and four percent to Africa). France’s arms sales for the first half of 2015 created more than 30,000 jobs— significant for a country grappling with record high unemployment.