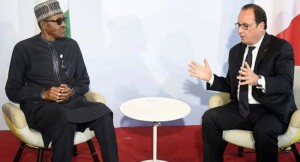 President Francois Hollande of France has offered to host a new summit of Nigeria, Niger Republic, Chad and Cameroun, all of which are currently locked in a battle with the terror sect, Boko Haram.

Hollande spoke after talks in Yaounde, the capital of Cameroon with President Paul Biya. “Nigeria and Cameroon need to have the best relations … to work together. This corresponds well with the spirit we had at our last summit in Paris to take important decisions about Boko Haram, whose threat is getting stronger,” Hollande said.

“I am ready to gather anew, as soon as the presidents give me a date, this conference so that we can better act together,” the French president said.

The first summit took place in Paris in May 2014 where the four countries pledged to wage a joint war against the terrorists.

They agreed to share intelligence and co-ordinate action against the group.

That summit was called a month after the sect abducted 223 students of Government Girls’ Secondary School, Chibok, Borno State.

Although, a few of the girls managed to escape, over 200 are yet to be found.

The joint operations have dislodged the insurgents from many of the territories under their control.

The sect leader, Ahmed Shekau, who had formed the habit of releasing video messages to mock the nations fighting his group has disappeared from the radar for some time now.

However, the sect has stepped up its attacks in Borno State, southern Niger Republic and Chad lately apparently in a desperate bid to demonstrate that it has not lost its bite.

President Muhammadu Buhari has vowed to crush whatever remains of the rebellion.