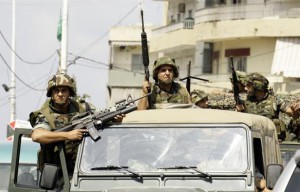 The first French weapons from a $3 billion Saudi-funded programme will arrive in Lebanon on Monday as allies seek to bolster the country’s defences against the Islamic State group and other jihadists pressing along its Syrian border.

Anti-tank guided missiles are set to arrive at an air force base in Beirut, overseen by French Defence Minister Jean-Yves Le Drian and his Lebanese counterpart, Samir Mokbel.

France is expected to deliver 250 combat and transport vehicles, seven Cougar helicopters, three small corvette warships and a range of surveillance and communications equipment over four years as part of the $3 billion (2.8 billion-euro) modernisation programme.

It is being entirely funded by Saudi Arabia, which is keen to see Lebanon’s army defend its borders against jihadist groups, particularly the Islamic State group and Al-Qaeda-linked Al-Nusra, instead of leaving the job to Hezbollah militants, who are backed by its regional rival, Iran.

“This project is to help us re-establish a Lebanese army capable of responding to new security realities,” said a French defence official.

Since the conflict in neighbouring Syria broke out in 2011, Lebanon has faced mounting spill-over threats, first from the millions of refugees pouring across the border and increasingly from jihadists.

“There are an estimated 3,000 armed militants based on our border, waiting for the moment to penetrate into the Bekaa valley,” said Hisham Jaber, a former general now at the Middle East Centre for the Study of Public Relations in Beirut.

“They haven’t come for tourism or to go skiing.”