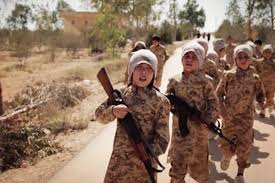 Ten children who belong to families with alleged ties to the so-called Islamic State in Syria were handed over to a French government delegation, a senior official from the Self Administration in Northern and Eastern Syria announced on Monday according to kurdistan24.net.

Dr. Abdulkarim Omar, co-chair of the Foreign Relations Commission of the Self Administration in Northern and Eastern Syria, made the announcement on Twitter. Omar said a French Foreign Ministry delegation, headed by Ambassador Eric Chevallier, received the children who are “orphaned and humanitarian cases.”

French authorities have not yet confirmed the handover.

According to a report by the French news organization Le Journal du Dimanche, the French government previously said it would examine the repatriation of women with alleged Islamic State ties and their children “on a case-by-case basis and assessed in the best interests of the child.”

There are currently 13,500 foreign women and their children who reside in three makeshift camps in northeastern Syria, according to a report by the International Crisis Group (ICG) published on April 7.

The ICG said there were fears COVID-19 could spread to these camps in northeast Syria. But there have been no confirmed cases of the coronavirus at these camps.

Local Kurdish-led authorities in northern Syria have often urged foreign states to take back their nationals who fought for the terrorist organization, including women and their children.

Some countries have repatriated many of their nationals on humanitarian grounds. However, due to the COVID-19 pandemic, plans to repatriate foreigners have been mostly halted.

Thomas McClure, a Syria-based researcher at the Rojava Information Center, previously told Kurdistan 24 that only a small percentage of women and children have been successfully repatriated due to a “total lack of serious effort by foreign powers, and Western European countries in particular.”

As a result, the local Kurdish-led authorities said they would focus on building a new camp for children and wives of Islamic State members. They have also spoken about setting up an international court to prosecute members of the terrorist group inside Syria.

In early June, local authorities finished a registration campaign to identify and take DNA samples of foreign women with Islamic State ties at the Al-Hol camp.

Authorities said this process would help them facilitate the repatriation of foreign nationals in coordination with their home countries.