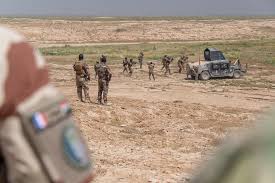 She held talks with her counterpart Jumaa Inad and President Barham Saleh, and is due to meet Prime Minister Mustafa al-Kadhemi before traveling to the autonomous Kurdish region in northern Iraq.

During a brief press conference with Inad, she said France was hoping to resume its training and arming of Iraqi security forces “as soon as possible.”

Support was suspended earlier this year in the face of the COVID-19 pandemic.

Parly said she and Inad also discussed boosting Iraq’s surveillance methods, “by land and in its airspace,” to squeeze IS sleeper cells still operating in desert areas.

“We are convinced that the fight against (IS) is not over,” she said. “We are by your side.”

Ahead of her trip, the French defense ministry said it wanted to make sure operations against IS in Iraq would not be derailed by heightened tensions between the US and Iran.

Iraq has been caught for years in the power struggle between its two main allies but has had to walk an increasingly fine line since 2018, when the US began a “maximum pressure” campaign against Iran.

In January, a US drone strike on Baghdad killed top Iranian and Iraqi officials, and Iran retaliated with strikes against US troops in western Iraq.

When Le Drian visited in July, he insisted Baghdad “should dissociate itself from regional tensions” and stay focused on the fight against jihadists.