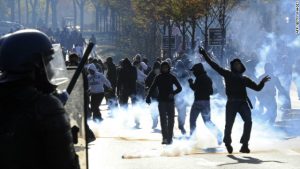 Young Muslims and non-Muslims in France diverge in their relationship to political violence and religion, according to a new survey on radicalization among high school students.

Young Muslims in France are more likely than their non-Muslim peers to say they believe there is only “one true religion” and more likely to consider it acceptable to steal a scooter or engage in violent altercations with police, according to a new book-length study excerpted in Le Monde on Tuesday, which diagnosed a “cultural cleavage” between Muslim and non-Muslim youth.

The survey is a result of questions sent to more than 7,000 high school students between 14 and 16 living in areas that exhibited signs of political radicalization, including riots and frequent altercations with police.

A majority of students across the board made a distinction between the November 2015 attacks that left 130 people dead — which they saw as entirely “random” — and the attack on satirical newspaper Charlie Hebdo’s staff in January 2015, which they mostly agreed “had it coming” because the paper frequently published provocative cartoons that were offensive to Muslims.

Among students who said they condoned political violence and held radical religious beliefs, 70 percent said they didn’t condemn the perpetrators of the January 2015 Charlie Hebdo attack, according to a write-up of the study by French outlet Marianne.

“Many students we met seemed to say: If no attack is acceptable, neither is the publication of cartoons of Mohammed,” according to a sociologist quoted in the findings. “For them, the cartoonists acted in a morally unacceptable way. This idea that everyone, whether they are believers or not, has to respect religious dogma is one of the dimensions of religious absolutism.”

The authors of the study — sociologists Anne Muxel and Olivier Galland — also drew a link between lack of integration in the school system and radical political beliefs, and noted high levels of distrust toward police among students with migrant backgrounds.

The authors explained their findings as the result of harsh economic factors and the experience of discrimination, which is twice as high among young Muslims.

They also noted that Muslim youth exhibited a “strong return to a religious practice” contrary to the secularization seen among other young people, and that an embrace of radical religious ideas often went hand-in-hand with violence.