You are here: Home / MidEastGulf / France makes 1st reconnaissance flight over Syria against IS 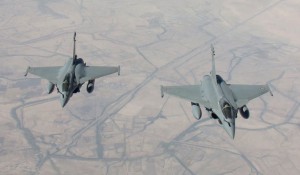 Tuesday’s confirmation from Laurent Fabius and a French military official comes as Britain defended a drone strike in Syria that left two Britons dead. France’s president, announcing plans for the reconnaissance flights, said they would be used to plan airstrikes against the Islamic State group.

Until now, France has only sent jets to Iraq, fearing that hitting at IS would ultimately help the government of Bashar Assad. Fabius said earlier Tuesday that a political transition that does not include Assad is the only hope to end the war in Syria. The military official, who was not authorized to give details of the forays, said the Rafale jets took off from the United Arab Emirates.