You are here: Home / Europe / France: Macron to tighten border controls as part of efforts to combat Islamic terror 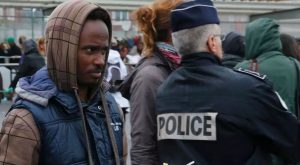 French President Emmanuel Macron announced that the government will be tightening the country’s border control systems and mitigating the influx of illegal immigrants into the country. Macron said Thursday that the move is part of a strategy to eliminate the “terrorist threat” that is growing rapidly within the nation.

As part of the plan, France intends to increase the number of border agents from 2,400 to 4,800. Macron intends to also crack down on illegal immigration operations to prevent radicalized Muslims from entering the country.

The decision comes just days after the latest terror attack on French soil, involving the killing of three victims inside the Notre Dame Basilica in the city of Nice. The perpetrator was identified to be an Islamic jihadist, who had decapitated one of the victims. Authorities identified the killer as 21-year-old Tunisian Ibrahim Issaoui, who reportedly entered the country illegally through the Italian border.

“We see very clearly that terrorist actions can actually be led by some people who use migratory flows to threaten our territory. So, we must reinforce our controls for reasons of national security,” Macron said during his visit to the country’s border with Spain.

In the aftermath of the series of alleged terror attacks, France has elevated its security alert to its maximum. Threats against the country and its president reached its peak after Macron openly defended French satire magazine Charlie Hebdo and its cartoon depiction of the Muslim Prophet Mohammed. Macron repeatedly said that he was unwilling to change any of the country’s laws that protect its people’s right to free speech.

Macron’s statements have enraged the Muslim world and have called for a boycott of all French products. The situation was worsened after Macron said that the Islam religion was “in crisis.” Depictions of the Prophet Mohammed are considered to be sacrilegious in Islam and a sin punishable by death.

Macron recently expressed deeper concerns over the issue’s impact on the rest of Europe. Earlier in the week, a brutal attack left at least five people dead in Vienna. The Islamic State group had claimed responsibility for the attack.