You are here: Home / MidEastGulf / France launches airstrikes on oil sites near Raqqa 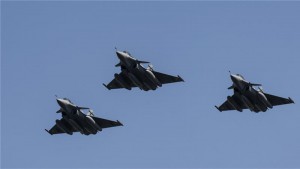 France carried out airstrikes early on Friday against oil sites in Syria near Islamic State’s stronghold of Raqqa, French Defense Minister Jean-Yves Le Drian said during a visit to a military base in Jordan.

France was the first country to join U.S.-led airstrikes in Iraq. Since the Nov. 13 attacks on Paris, it has increased its aerial bombing of Islamic State in Syria, focusing on Raqqa and oil-related targets.

“I have had feedback from the overnight operations, we must continue in that direction,” Le Drian told soldiers and reporters at the Jordan base from which Mirage 2000 jets took off in the early hours of Friday to conduct the airstrikes.