You are here: Home / Europe / France is looking to sell new assault ships to Russia 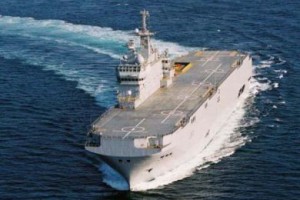 France is looking to sell new ships to Russia in the future despite the cancellation of a controversial deal for two Mistral-class warships this year, French President Francois Hollande said Tuesday.

“Things went well with Russia, which has agreed to cancel the contract. And I even think we’ll get partnerships for new ships,” Hollande said during a visit to the shipyard of Saint-Nazaire in western France. He didn’t specify whether they could be military ships.

Hollande came aboard one of the warships that was originally named the Vladivostok, in reference to the Russian port. The inscription on the hull has been erased and replaced by grey paint.

The Mistral sale was supposed to be the biggest arms sale ever by a NATO country to Russia, until the deal fell apart because of the Ukraine crisis. France refunded the 950 million euros ($1 billion) already paid by Russia and sold the ships to Egypt, which signed a 950 million-euro contract last week.

“I had to sell them to a country that needed to ensure its own security but didn’t threaten anyone,” Hollande said.

Egypt is increasing its military capabilities as the country tries to assume a more prominent role against Islamic State militants.

The assault ships can each carry 16 helicopter gunships, 700 troops and up to 50 armored vehicles. They are due to be delivered to Egyptian authorities in March 2016.