You are here: Home / Europe / France ‘failing to plug gaps in intelligence system’

Centrist party leader warns of another terror attack if France doesn’t clamp down on radicalization. 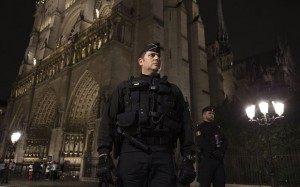 France is shying away from hard truths about intelligence failures that led to the terrorist attacks in Paris, the head of the centrist UDI party warned Tuesday.

Jean-Christophe Lagarde, who is also the mayor of Drancy — the town near Paris where Bataclan attacker Samy Amimour and other known terrorists grew up — said that unless France did more to stop its citizens heading to Syria, further attacks were certain.

He cited Amimour as an example of the system’s failings. Despite having been arrested, along with two friends, in 2012 on suspicion of planning terrorist attacks, all three were able to head to Syria and receive military training.

When Amimour came back to France, it was to play a key role in the country’s worst-ever terrorist attack.

“The gaps that allowed them to leave still have not been closed up,” Lagarde told the European American Press Club in Paris. “The state is incapable today of preventing people in the same situation [as Amimour] of leaving, even if they have been arrested for that very reason [trying to join a terrorist organization abroad].”

Lagarde said he knew the Amimour family, whom he described as secular, middle-class and involved in the local community.

Amimour — a “shy and well-dressed young man” — set off alarm bells at home when he started telling his mother to wear a veil. She was “almost relieved” when her son was arrested before a planned trip to Yemen, because she thought that would stop his radicalization.

But Amimour and his two friends, who had been stripped of their French passports, were all able to leave France, at one-month intervals.

In June 2014, Amimour’s father traveled to Syria to try to convince his son to return home. But their encounter, whose exceptional coldness he described in an interview with Le Monde, was a failure.

Eighteen months later, Amimour would return to France and attack the Bataclan theater, while another Drancy resident, Charaffe Al-Mouadan, would help to prepare the attack from afar.

The latter was killed in a U.S. airstrike in Syria, while Amimour died during a police raid on the night of the attacks. The third member of the trio is still at large.

“To stop such people from leaving the country, you need to check their IDs at the border,” Lagarde said. “Yet even now, we’re not doing that systematically.”

The UDI chief, whose party is often a kingmaker in French elections, joined a growing chorus calling for a parliamentary investigation into the state’s intelligence failures.

After a year in which some 150 people were killed in terrorist attacks, France is under pressure to review its basic practices — notably regarding so-called “S” files, a classification of radical Islamists that has expanded to include as many as 40,000 individuals.

Other critics, including former anti-terrorism judge Marc Trevidic, have criticized the “S” file system, which they say overwhelms security services with information and prevents them from monitoring the most dangerous individuals effectively.

“It’s shocking to me that we’re talking about 30,000 or 40,000 ‘S’ files and only 1,000 or so are considered dangerous … How to monitor them all? We can’t,” Lagarde said. “There is an urgent need to investigate the failures that allow young men to leave to Syria and to understand how we could let them go.”

However, Lagarde noted that such investigations, while common in many countries, were a rarity in France. That was partly because, historically, governments did not want to give confidential information to Communist members of parliament who could send the information back to Moscow.

In this case, launching a parliamentary probe would be tricky because a judicial investigation into the attacks is ongoing, he said.

“I don’t think for a second that we are done with this sort of tragedy,” Lagarde said.