You are here: Home / Europe / France extends state of emergency ‘until ISIS is defeated’ 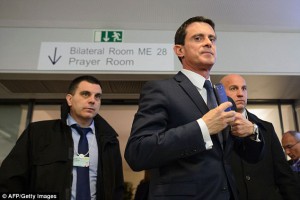 Speaking in Davos, Switzerland, the left-wing politician admitted that French security services have foiled a number of possible jihadi attacks since the November 13 atrocity.

He said France’s current state of emergency would continue until a ‘total and global war’ against ISIS was over. Initially it was thought the emergency measures would expire by February 26, but this deadline is likely to be extended.

Speaking to the BBC’s Lyse Doucet at the World Economic Forum, he said: ‘As long as the threat is there, we must use all means until we can get rid of Daesh.’

‘In Africa, in the Middle East, in Asia we must eradicate, eliminate Daesh. It is a total and global war that we are facing with terrorism. The war we are conducting must also be total, global and ruthless.’

Mr Valls said there could be further attacks on France. He revealed that six further plots have been foiled in recent months.

He also admitted that Europe was struggling to cope with the refugee influx from the Middle East claiming that the crisis is threatening the very future and concept behind the European Union.

He said: ‘We cannot say or accept that all refugees …can be welcomed in Europe. Germany is faced with a major challenge. We need to help Germany. But the first message we need to send now is with the greatest of firmness is to say that we will not welcome all the refugees in Europe. Because a message that says come, you will be welcome, provokes major shifts.’

Mr Valls also addressed the possibility of Britain leaving the European Union, claiming that so-called Brexit would be ‘a tragedy’.

He told a meeting in Davos: ‘We must find a compromise, everybody is contributing to this and I hope that the February meeting will allow us to make progress, that at least it will be a decisive step.

‘Seeing Britain leave the European Union would be a tragedy. We must do everything for Britain and the British people … to stay in the European Union. But of course not at just any condition, that wouldn’t make sense.’