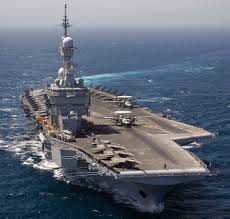 France is set to deploy its largest warship to join operations against the Islamic State group in Syria and Iraq, the BBC reported Thursday. The Charles de Gaulle aircraft carrier will reportedly cut down on the time it takes French jets to carry out airstrikes.

France has targeted the Islamic State group in Iraq with a U.S.-led coalition since September 2014 and began airstrikes in Syria this year. French President Francois Hollande described the move to deploy the aircraft carrier as “a rational choice” which would “allow us to be more efficient in coordination with our allies”.

The aircraft carrier can hold up to 40 aircraft and support some 100 flights per day. The warship, the only one of its kind in France’s fleet, is usually joined with attack submarine, frigates ships, refueling ships, fighter jets and surveillance aircraft, Reuters reported.

The Charles de Gaulle has previously been deployed in the fight against the Islamic State group, also known as ISIS or ISIL. It served as a base for French jets in the Persian Gulf from February through April. France is currently targeting the ISIS with six Mirage jets stationed in Jordan and six Rafale jets in the United Arab Emirates, according to the BBC.

French officials have said that the airstrikes against ISIS are self-defense measures after Islamist gunmen killed 17 people in attacks in Paris in the beginning of 2015. French jets have since carried out 271 air strikes in 1,285 aerial missions, according to Agence France-Presse. Just two of those French strikes are known to have taken place in Syria, targeting an Islamic State group training camp at the end of September.

The Charles de Gaulle is an 860-foot-long, nuclear-powered aircraft carrier. Construction of the ship began in the ’90s but was not completed until 2001, according to Business Insider. It has two aircraft strips for taking off in the front and one for landing in the back, and is reportedly capable of launching a plane every 30 seconds.