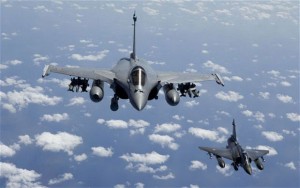 Egyptian authorities took charge of the planes at an air base in southern France, and they will be flown to Cairo by specially trained pilots on Tuesday.

Cairo is hoping to boost its military presence as it faces an unstable Libya to the west and threats from militants linked to the Islamic State group in its Sinai Peninsula to the east.

For Egypt, the agreement is also a show of support for President Abdel Fattah al-Sisi, who overthrew his Islamist predecessor in 2013 and wants to break a US monopoly over arms sales to Cairo.

The overall deal with Egypt also includes contracts for missiles and for an FREMM multi-mission frigate from naval group DCNS.

However, the deal has sparked concern from campaign groups worried about Cairo’s human rights record.

Some have accused Paris of double standards for freezing its delivery of two Mistral-class warships to Russia over the Ukraine crisis but going ahead with the Egypt deal.

The deal is a much-needed boon to cash-strapped France and Paris hopes that by showcasing French military technology it will prompt more orders for its premier combat jet, which it struggled for years to sell.

For a long period, France was the only country to buy the Rafales from Dassault. Its military forces have ordered 180 warplanes and 137 have been delivered.

Attempts to sell the jet to countries such as South Korea, Singapore, Morocco, Switzerland and Brazil have seen the Rafale lose out to its foreign competitors.

But this year the company has enjoyed much more success, clinching deals with Qatar and Egypt, as well as a firm order from India and interest from the United Arab Emirates.

Eric Trappier, the head of Dassault Aviation, which manufactures the warplanes, thanked the French military “without whose support this success would not have been possible.”

Planes that were supposed to be delivered to the French military were instead handed over to Egypt in order to be able to honour the contract.

In a further coup for French military exports, India in April ordered 36 Rafales in a multi-billion-euro deal that took years to conclude.

At the Paris Air Show in June, French Defence Minister Jean-Yves Le Drian said a final deal with New Delhi would likely be struck “within two or three months.”

And in May, Qatar signed a multi-billion-euro deal with Dassault to buy 24 Rafale fighter jets.

French Foreign Minister Laurent Fabius said in April that talks with the United Arab Emirates on buying Rafales were also headed in the “right direction”.

The figures put France “solidly” in fourth place in terms of global arms exports, the report said, behind the United States, Russia and China.

After that came Europe (13 percent), the Americas (11 percent) and Africa (four percent).

The top French client over the period was Saudi Arabia, which snapped up 12 billion euros’ worth of weapons over the period — including three billion dollars spent to supply the Lebanese army.