You are here: Home / Europe / France could join new fronts against Islamic State 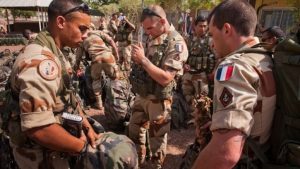 The battle against Islamic State in the Levant is nearing its end, French President Emmanuel Macron said on Thursday, but he left the door open to Paris engaging elsewhere to tackle Islamist militant groups if needed, like reported by reuters.com.

“We have won the war in Raqqa, and the coming weeks … will enable us to win completely on a military level in the Iraqi-Syrian zone,” Macron said in a speech at a French military base in Abu Dhabi where he is on a two-day visit.

France has supplied weapons and training to local forces in Syria and Iraq, has special forces operating in the region and has been one of the main countries bombing militants as part of the U.S.-led coalition. In total, it has some 1,200 troops in its Levant operation.

“This fight will not be finished. In the Gulf, passing through south-east Asia and the Sahel, there are lots of places where the military fight will continue,” he said.

France’s other main area of combat is West Africa, where it has some 4,000 soldiers as part of a counter-terrorism operation against al-Qaeda-backed militants and where there appears little prospect of Paris being able to disengage anytime soon.

Speaking to France 2 television, Macron appeared to go a step further by suggesting that France could be ready to act elsewhere across Africa if required.

”We also have to be very careful about the projects that these Islamist terrorist groups have, such as in the Horn of Africa, Libya and the Sahel.

“There will be theatres of operation in which our soldiers are present, such as in the Sahel, but there will undeniably be new battlegrounds against Islamic State, al-Qaeda or Boko Haram,” he said.

Some analysts have warned that France’s military is already overstretched, but politicians may find themselves in a position where it is difficult to refuse demands by some of its allies, especially the United States, to commit more troops in areas such as Afghanistan.