You are here: Home / Europe / France considers air strikes against IS group in Syria 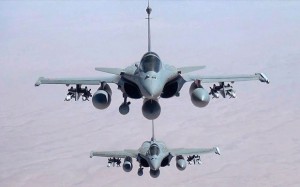 The crisis of refugees fleeing civil war in Syria would explain this change in strategy, Le Monde said.

“Everybody realises that things can not continue as they are,” it quoted the source as saying.

Since September 2014, France has been engaged in an international coalition supporting groups fighting against Islamic State militants, but until now has refused to intervene militarily in Syria.

Government officials declined to comment on Le Monde’s report, saying President Francois Hollande would express his views on the matter at a news conference on Monday.

On Thursday, Hollande called for a “political solution” in Syria.

“We must ensure that we can find a political solution in the fight against terrorism with the right methods and good cooperation,” he said to reporters.

“We cannot only hold speeches. There must be decisions made by the international community,” said Hollande, who along with German Chancellor Angela Merkel proposed setting up a “permanent and binding” mechanism for distributing Syrian refugees among European Union countries.