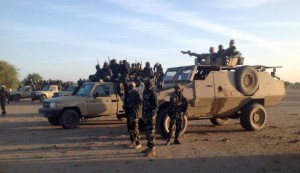 The governments of France, Canada and Germany at the G-7 Summit in Elmau, Germany promised to assist Nigeria fight Boko Haram.

The three countries specifically pledged to help the country with training of military personnel and intelligence gathering on the activities of the sect.

Raising issues of terrorism, Canadian leader at the summit, said: “Like other G-7 members, Canada is concerned about the emergence of ISIS-affiliated groups elsewhere in the Middle East, in Afghanistan, Pakistan and Africa, including Boko Haram in Nigeria.”

A statement issued by the Senior Special Assistant, Media and Publicity to the President, Malam Garba Shehu, said Buhari pledged to rout out Boko Haram at a meeting with President Francois Hollande of France after his participation in the G-7 Outreach Programme.

According to the release, Buhari said Nigeria will welcome greater support and cooperation from France and other friendly nations for its ongoing efforts to overcome Boko Haram and restore normalcy to areas affected by the group’s atrocities.

The President said his administration was already taking concrete action to build a more efficient and effective coalition of Nigeria and neighbouring countries against Boko Haram.

Nigeria, he said, would appreciate more intelligence on the terrorist group’s links with ISIS, movements, training and its sources of arms and ammunition.

This, according to him, is to facilitate the perfection of fresh tactics and strategies being evolved to overcome terrorism and insurgency in the country and its sub-region.

Buhari reiterated that there was absolutely no link between religion and the atrocities of Boko Haram.

He said: “There is clearly no religious basis for the actions of the group. Their atrocities show that members of the group either do not know God at all or they don’t believe in him.”

The French leader assured Buhari that France would give Nigeria and its coalition partner’s greater support against terrorism and insecurity, including military and intelligence cooperation.

He said the support was to help them to overcome the security challenge posed by Boko Haram and its global terrorist allies as quickly as possible.

He also called for greater bilateral cooperation between Nigeria and France in other areas, including trade, economic and cultural relations.

The release added that Buhari also received similar pledges of enhanced support from Prime Minister Stephen Harper of Canada and Chancellor Angela Merkel, who he also conferred with before departing from the venue of the G-7 2015 Summit. The President is due back in Abuja early today.

President Buhari, who was invited to the summit with a wish list, had listed the war against Boko Haram as number one priority presented to the G-7 meeting.

According to a communiqué issued after the meeting, the group of seven leaders spent extra time discussing terrorist threats after a shortened debate on curbing climate change, a topic championed by Germany, France and Italy.

Leaders meeting for the second and final day of the G-7 summit in the Bavarian Alps switched topics after 35 minutes of their morning session and “opted to dedicate the remainder” to “global threats to international security,” Canada’s delegation said in a statement.