You are here: Home / Mediterranean / France calls for extra security measures in Algeria 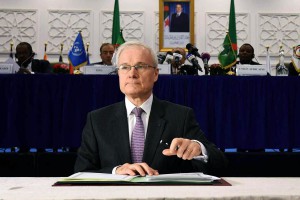 French Ambassador in Algiers Bernard Emié yesterday called on the Algerian authorities to strengthen security measures around French establishments in the country after the bloody attacks that targeted the French capital, Paris, on Friday, Turkey’s Anadolu Agency reported.

In a statement addressed to the French community and posted on the embassy site, Emié said: “I invite you to be calm and vigilant and follow the safety tips carefully both from the Algerian authorities about travel within the country or travel advice issued by the French Ministry of Foreign Affairs.”

The ambassador stressed that the goal is to “protect French citizens, whether at home or abroad, because those who targeted Paris could target the country’s missions abroad.”