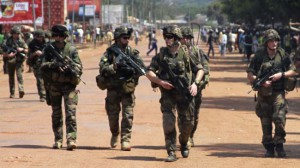 French Defence Minister Jean-Yves Le Drian on Tuesday asked other EU states for help with its military operations abroad and support in its fight against the Islamic State group in Syria and Iraq.

“France cannot act alone in these theatres,” Le Drian told fellow EU defence ministers during a meeting in Brussels, according to aides.

Le Drian invoked article 42-7 in the EU treaties that provides for the solidarity of member states in the event of an attack on one of them.

His appeal came after Friday’s bloodshed in Paris — the worst ever terror attacks on French soil.

“France would like to ask its European partners for their bilateral support in the fight against Daesh in Iraq and Syria as well as increased military participation from member states in operational theatres where France is deployed,” an aide told AFP on condition of anonymity, using another Arabic acronym to refer to the Islamic State group.

It is the first time that a European Union member state invokes the article, which is similar to NATO’s article five which the United States activated after the September 11, 2001 attacks and triggered the alliance’s intervention in Afghanistan.