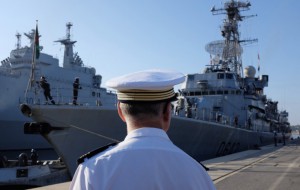 French authorities said Tuesday that a 25-year-old Frenchman was arrested for plotting to attack military personnel at a major naval base in southeast France.

“Having been placed under surveillance for a year due to his radicalization and support of jihadist doctrine, this individual attempted to acquire tools to act,” said Interior Minister Bernard Cazeneuve in a statement.

The statement added that the Frenchman, who had links with members of the “Islamic State” militant group in Syria, “attempted to acquire material to carry out a violent attack on Navy personnel in Toulon.”

According to judicial sources, the man was sent a parcel containing at least one balaclava and a knife.

Citing a source close to the case, AFP news agency reported that the man admitted to plotting to attack servicemen at France’s largest Mediterranean naval base, which houses 70 percent of the French fleet along with 20,000 military and civilian personnel.

France has been on high alert since January, when militants killed 12 people, beginning with an assault on the offices of Charlie Hebdo.

The interior ministry has said that several attacks were foiled since January’s attack.