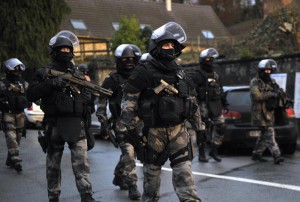 The men were arrested on Saturday night after an investigation by France’s DGSI domestic intelligence service.
A source close to the investigations said police had to swoop in due to several “serious factors” in the case, although the source didn’t go into further detail.
The men were still in police custody on Sunday night, according to reports.
The men were awaiting the delivery of weapons, reported Le Parisien newspaper, while iTele reported that the men were already in possession of a sub-machine gun.
The police made the raid at 3am in the Meinau and Neuhof neighbourhoods.
Another two men with connections to the case were arrested in Marseille over the weekend.
While the intentions of the arrested men remain unclear, several French channels pointed to the idea that a potential target could have been the Strasbourg Christmas markets, which are scheduled to begin in just days.
The event, which saw boosted security checks after last year’s November attacks in Paris, typically draws enormous crowds.
The same market was reportedly the target of a bombing plot back in the year 2000.
France remains on edge since the November attacks in Paris last year when 130 people were killed. The country is still under a state of emergency.
thelocal.fr