You are here: Home / Africa / France and UK participate in launch of Sahel task force Takuba 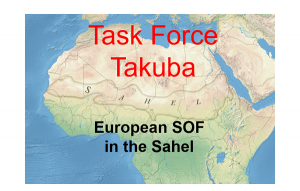 The ministers of defence and representatives from Belgium, Czech Republic, Denmark, Estonia, France, Germany, Mali, Niger, The Netherlands, Norway, Portugal, Sweden and the United Kingdom participated in the launching of the Task Force Takuba. Due to the epidemic of COVID-19, the meeting was held remotely.

Mme Florence Parly introduced the political conclusions of the Pau Summit. She underlined the strong commitment of the G5 Joint Force partners, and detailed the French strategy in the Sahel region. The French Minister for the Armed Forces also focused on the engagement of the European countries in the region and seized the opportunity to thank the present nations for their valuable support. General Lecointre, French Chief of Defence Staff, completed the French overview on the Sahel security situation with an update on operation Barkhane.

General Ibrahima Dhirou Dembélé, Minister of Defence and Veterans of the Republic of Mali, and Mr Issoufou Katambé, Minister of Defence of the Republic of Niger, shared their analysis of the local security situation. They both highlighted the necessity and urgency to fight against organized armed groups conducting terrorist actions in the Liptako-Gourma region, and in particular, the Islamic State in the Greater Sahara (IS-GS) and the Group to Support Islam and Muslims (GSIM). They reaffirm the necessity to disarm all the fighters linked to the Signatory Armed Groups (SAG).

Considering the security situation in Mali and more broadly in the Sahel, Belgium, the Czech Republic, Denmark, Estonia, France, Germany, the Netherlands, Norway, Portugal, Sweden and the United Kingdom agreed on setting up a task force, at the request of the Malian President, His Excellency Ibrahim Boubacar Keita, and Nigerien President, His Excellency Mahamadou Issoufou, to assist the Malian Armed Forces in countering terrorist groups and to complement the current efforts made by operation Barkhane and the G5 Sahel Joint Force. All military engagements in the Sahel and Takuba in particular, are part of a wider, more comprehensive approach to promote security and stability in the region. Takuba will therefore be part of the counter-terrorism pillar of the “Coalition for the Sahel”, the broader coordinating framework recently announced in Pau. Ultimately, the ministers recognized that the threat of terrorism in the Sahel cannot be countered by military means alone.

The Takuba task force will be placed under Operation Barkhane’s command and operate in the Liptako region. It will be mainly composed of European Special Operations Forces and supported by key enablers providing a high level of autonomy. It will advise, assist and accompany Malian Armed Forces, in coordination with G5 Sahel partners, the UN mission (MINUSMA) and EU missions (EUTM Mali, EUCAP Mali and EUCAP Niger), with a robust legal basis in compliance with international law. Participants welcomed the contributions already approved by Belgium, Denmark, Estonia, France, the Netherlands and Portugal, as well as the planned contribution by Sweden (pending parliamentary approval) and called for additional commitments as part of this common European effort aiming at increasing international security.

Task Force Takuba is planned to have an initial operational capability (IOC) by the summer of 2020 and expected to become operational (FOC) by early 2021. Task Force Takuba is envisaged to act swiftly and to adapt to the evolving threat represented by terrorist groups and will play a key role in rapidly empowering local armed forces.

The ministers of defence have expressed their solidarity with the Chadian population and defence forces, after the terrorist attack on the island of Boma./.