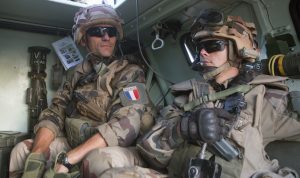 French President Emmanuel Macron agreed during a summit with leaders of West and Central African nations to send hundreds of more troops to reinforce the region’s fight against Islamic terrorism, like reported by upi.com.

During a summit meeting Monday in the southwestern French city of Pau, Macron and the leaders of Burkina Faso, Chad, Mali, Mauritania and Niger reaffirmed their commitment to fighting extremism in the Sahel, a semi-arid belt stretching 2,400 miles across the breadth of the continent, they said in a joint statement.

Macron also said he agreed to send 220 additional combat troops to reinforce Operation Barkhane, France’s largest overseas mission to counter terrorism in the region, which has seen an uptick in violence in recent years.

On Thursday, Mohamed Ibn Chambas, head of the U.N. Office for West Africa and the Sahel, told the U.N. Security Council that the region was under “relentless” attack from terrorism.

On the same day Chambas gave his speech, 89 Niger soldiers were killed in an attack on an army outpost.

On Monday, the six nations’ leaders also agreed to a new framework called the “Coalition for the Sahel” that is organized on the principles of fighting terrorism, strengthening the military capacities of the region’s nations and fortifying state and administration services such as criminal and judicial chains to reinforce the rule of law.

Concerning terrorism, the nations agreed to fight militant groups as one, focusing their efforts in the tri-border region of Mali, Burkina Faso and Niger.

Macron had earlier called the summit threatening to pull his 4,500 troops from the region amid anti-France sentiment growing in its former African colonies.

“I can’t have French troops on the ground in the Sahel when there is ambiguity toward anti-French movement and sometimes comments made by politicians and ministers,” he said in Britain in early December, The New York Times reported.

On Monday, the heads “expressed the wish for the continuation of France’s military engagement in the Sahel and called for a strengthening of the international presence alongside them,” the countries said in the joint statement.

They also “expressed their gratitude for the crucial support provided by the United States and expressed the wish for its continuity.”

The call comes as the United States has been considering a drawdown of troops — if not a full withdrawal — from West Africa.

Macron said he would appeal to President Donald Trump to keep his troops put.

“If the Americans decided to leave Africa, this would be very bad news for us,” he said.

In a tweet announcing his commitment of troops, Macron encouraged others to do the same.

“All partner countries who wish to do so are welcome,” he said.