You are here: Home / Europe / France agrees to have role in Iran’s nuclear industry 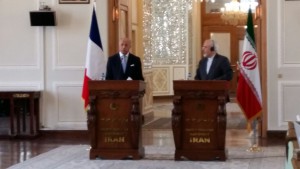 During a joint press conference with his French counterpart Laurent Fabius on July 29 in Tehran, Zarif said that Paris and Tehran has talked bilateral relations, especially in energy and transport sectors today.

Iran’s FM further said that France has agreed to have a role in Iran’s nuclear industry. He added that a French economic delegation is expected to arrive in Iran by the end of summer.

Zarif also highlighted that Iran and France have agreed to continue political and nuclear negotiations.

Laurent Fabius in turn said that he will meet with Iran’s top officials in Tehran, including Iran’s President Hassan Rouhani, energy minister Hamid Chitchian, Vice President of Iran and head of Environmental Protection Organization Masoumeh Ebtekar and other high-ranking officials.

“France is keen to resume relations with Iran, in auto, aviation, energy, health fields,” he said. “There is a massive field of mutual cooperation in social, cultural, tourism and other spheres as well.”

He also said that resuming the relations between Iran and France also should include regional and global issues, as according to Fabius, France and Iran have common interests in fighting extremism and terrorism.

He also called the nuclear agreement between Iran and P5+1 (achieved on July 14) an accord for “security and stability in the region and world”.

The French FM also mentioned his so called “tough position” in nuclear negotiations, saying that the reason was that Iran’s nuclear is not a unimportant issue, as France supports peaceful nuclear developments, not the creation of a nuclear bomb.

He also called France position in nuclear talks constructive, saying that Paris is strongly against proliferation of nuclear arms.