You are here: Home / Europe / France: 40 Islamic terrorists to be released soon 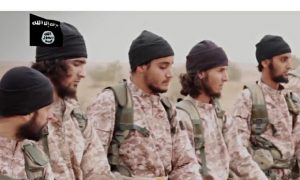 France’s anti-terrorism prosecutor says about 40 convicted terrorists are due to be released from French prisons this year and next, calling the re-entry into society of the unrepentant ones a “major risk”, like reported by foxnews.com.

Molins estimated that 600 to 700 French extremists are unaccounted for in the areas of Iraq and Syria claimed by IS, though many have probably been killed. He says authorities think some organizers of the November 2015 attacks in Paris are among the dead in the Mideast.

Molins says the investigation of the simultaneous attacks at the Bataclan concert hall, Paris cafes and the national stadium that killed 130 people should conclude next year.