You are here: Home / Europe / France: 4 arrested for terrorism, including teen, explosives seized in raid 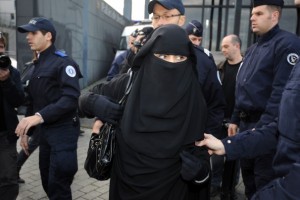 French anti-terrorism forces arrested four people in southern France on Friday, including a 16-year-old girl, and uncovered a makeshift laboratory with the explosive TATP and other base ingredients for fabricating a bomb, the Paris prosecutor’s office said to ap.org.

The prosecutor’s office said around 70 grams of TATP were seized in the home of a 20-year-old man in the Montpellier area, along with a liter each of acetone, oxygenated water and sulfuric acid. TATP, which can be made from readily available materials, was used in the November 2015 attack in Paris and the March 2016 attack in Brussels carried out by Islamic State extremists.

Two other men were arrested, a 33-year-old and a 26-year-old, along with the 16-year-old girl, according to the prosecutor’s office, which handles terrorism investigations in France.

A police official, speaking on condition of anonymity to discuss the unfolding investigation, said one of the suspects was believed to be planning a suicide attack but that the investigation had not yet uncovered a specific target.