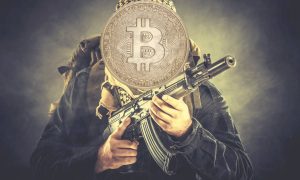 French authorities have arrested 29 people allegedly operating a sophisticated network of funding jihadists and al-Qaeda members with cryptocurrencies. The police suspected that the network has been active for over a year and has funded terrorist organizations for hundreds of thousands of euros.

According to the report, France opened an investigation in January 2020 when a service of the Ministry of Finances called Tracfin detected a complex network of funds transferred to French jihadists that remained in Syria.

Months later, this led to the massive nation-wide operation in which the local police arrested 29 people suspected of involvement with the network. The two primary targets identified as Mesut S. and Walid F. were allegedly the architects of “this network of terrorism financing.”

The authorities connected both of them with Hayat Tahrir Al-Sham – a group affiliated with al-Qaeda. Mesut S and Walid F were already convicted in France in 2016 and sentenced in absentia to 10 years in prison.

The remaining 27 detained people for questioning are aged between 22 and 66. Although the police believe all of them to be injecting funds into the network, most had relatively smaller roles.

The report further explained that the initial stages of the network began in 2013. The suspects primarily used cash and transferred it to countries neighboring Syria. However, as authorities tightened their grip, the network evolved to a more sophisticated and less visible system.

This led to the usage of cryptocurrencies in more recent years. Mesut S and Walid F allegedly orchestrated the digital asset transfers to French jihadists that remained in Syria.

The arrested 29 people purchased cryptocurrency coupons in France whose details were “transferred by secure messaging to jihadists in Syria, who could then retrieve the money through cryptocurrency platforms.”

The prosecutor’s office said that the suspects were constantly and anonymously buying such coupons worth between 10 and 150 euros. The authorities estimated that the total amount of transferred funds via digital assets equaled “hundreds of thousands of euros.”

The funds allegedly reached members of al-Qaeda still hiding out in northwest Syria, and jihadists of the Islamic State group on the run since Abu Bakr al-Baghdadi died during the US raids in October 2019.

It’s worth noting that this is not the first cryptocurrency usage in terrorist financing unveiled recently. As CryptoPotato reported earlier, the US Justice Department seized over 300 digital asset accounts operated by al-Qaeda, Hamas, and ISIS.