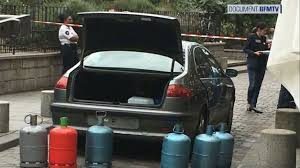 Two French members of an all-female Islamic terror group linked to ISIS have been sentenced to over 25 years in prison each for their failed attempt to blow up Notre Dame cathedral with a car packed full of gas cylinders.

Inès Madani and Ornella Gilligmann received 30 and 25 years in prison, respectively, on Monday after a French court found them guilty of the September 4, 2016 plot to blow up Notre Dame which prosecutors claimed would have killed at least 60 people if it had been successful.

The pair packed Madani’s father’s car with seven gas cylinders, doused it with diesel fuel, and attempted to set it on fire with a lit cigarette. Luckily for dozens of people sitting in a nearby bar, the improvised car-bomb did not detonate – diesel is not particularly flammable – and they ran away, though it did not take long for police to track them down. Giligmann was arrested two days later trying to flee the country with her family, while Madani was arrested with two other members of the terrorist cell as they carried out a knife attack on a police officer, planned with the help of the group’s mentor.

The jihadi women were inspired and loosely guided by Rachid Kassim, an Islamic State (ISIS, formerly ISIL) terrorist who had released a guide for prospective jihadists on how to commit attacks that included the gas cylinder method. Madani and Gilligan joined a Telegram channel operated by Kassim and sent him videos pledging allegiance to ISIS, as well as a video claiming responsibility for the Notre Dame attack before it failed.

While the women admitted their complicity in the plot, each blamed the other for instigating the attack. Giligmann insisted she tried to sabotage the plot by using diesel instead of something more flammable. Madani only escaped a life sentence because of her relative youth, the prosecutor said – she was just 18 at the time of the attack, having been recruited herself by a prominent ISIS member she met online.

Giligmann was initially lured into the cell by Madani, who posed online as a returned ISIS fighter looking for a bride to commit acts of terror with back in France. The pair exchanged over 4,000 messages on social media before they finally met, at which point Madani pretended to be the phantom fighter’s sister. Madani was additionally sentenced to eight years in April for attempting to recruit for ISIS over the internet, using her fighter persona to urge others to commit attacks in France and Belgium or join the caliphate in Syria.

Two other members of the cell, Sarah Hervouet and Amel Sakaou, received 20 year sentences for assisting Madani in the attack on the police officer. Another, Samia Chalel, was sentenced to five years for helping to hide Madani. Kassim was sentenced to life in prison in absentia, though he is believed by US authorities to have been killed in a drone strike near Mosul, Iraq in 2017.