You are here: Home / West Asia / Fourteen wounded as Muslims rebels storm base in Thai south 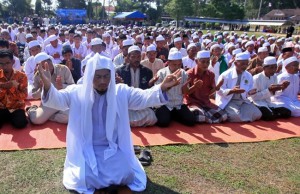 “30-40 attacked a base in Yaha district at around 1 am … they fired grenade launchers first, then M16 machine guns. It lasted for around 30 minutes,” Tanongsak Wangsupha, police commander of Yala, one of Thailand’s four southernmost states which have been roiled by the decade-long war.

“The rebels want to re-assert their power as now villagers are co-operating with state authorities,” he said, adding the security volunteers were Muslim.

The simmering conflict pits shadowy Malay Muslim rebels against security forces from Thailand, which annexed the region more than a century ago.

More than 6,400 people have been killed since 2004, the majority Buddhist and Muslim civilians targeted for their perceived support for the Thai state.

Rebels have said they want a level of autonomy for the region, which borders Malaysia, accusing Thailand of widespread rights abuses – including extrajudicial killings – and railroading the distinct local culture with forced assimilation schemes.

Tens of thousands of soldiers, police and paramilitaries enforce security across the impoverished South.

Thailand also pays and arms thousands of village volunteers to provide their own security, especially in remote Muslim areas.

Last year the military government said it had distributed 2,700 assault rifles to volunteers to provide local level protection – a move seemingly at odds with peace overtures.

Thailand’s ruling junta says it wants peace and has made initial contacts with rebel leaders ahead of formal talks.

But observers say ongoing political uncertainty in Bangkok is likely to deter the rebels from committing to anything substantial – moreso as talks with the previous civilian government evaporated when the military seized power in May last year.

Analysts say the violence decreased for several months earlier this year, thanks to a mix of confidence building measures and a tightening of security, but has spiked in recent weeks.

Two soldiers were gunned down on July 17 and their bodies burnt in Narathiwat province, while seven people were killed in a series of bomb blasts across the region on July 11.