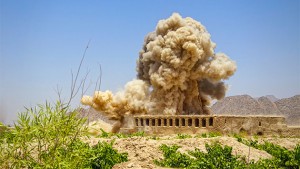 All six troops were with the Multinational Force of Observers (MFO), an international coalition set up to keep the peace between Egypt and Israel after a treaty was reached between the two nations at Camp David, Md., in 1978. The two international troops hit an improvised explosive device with their vehicle, and then the four Americans were hit with a second explosion on another vehicle while attempting to respond and provide help, said Maj. Roger M. Cabiness II, a military spokesman at the Pentagon.

The multinational force evacuated the soldiers by air with non-life-threatening injuries, said Navy Capt. Jeff Davis, another Pentagon spokesman, in a statement. The attacks occurred in the northeastern section of the Sinai, which has become increasingly volatile as militants inspired by the Islamic State have launched several large attacks.

U.S. military officials in Washington did not identify from which service the wounded Americans are from, but the MFO traditionally comprises U.S. soldiers and National Guardsmen in a unit called Task Force Sinai. It falls under the command of U.S. Army Central, which oversees Army operations in the Middle East, and includes at least 600 U.S. troops.

Cabiness said that the Pentagon is concerned about deteriorating security conditions in a northeastern part of the peninsula where Egyptian troops and the MFO are exposed to risk. The area is home to MFO North Camp, a base about 10 miles west of the Egypt’s eastern border with Israel. Several improvised bomb attacks have killed Egyptian troops in recent months.

“We are considering what, if any, additional measures might be needed to ensure force protection,” Cabiness said. “This includes bringing in additional equipment if necessary.”

U.S. officials will continue to consult with the governments of Egypt and Israel and with the MFO as it considers any potential changes, military officials said. The force has traditionally been lightly armed and protected.