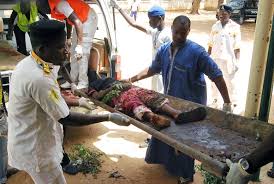 Suicide bombers have killed about 25 people in Cameroon in one of the deadliest recent attacks by Islamist militant groups connected to Boko Haram.

Four suicide bombers struck the town of Bodo in the north of the country, with two hitting the town’s central market and the others attacking its main entrance and exit points, according to a local official.

More people were also wounded at the scene, he said.

“There was a quadruple suicide bombing in the village of Bodo this morning. There are around 25 deaths and several wounded,” he told Reuters.

An 8,700-strong regional force of Cameroonian troops has been created to defeat Boko Haram, which has waged a six-year campaign to carve out a separate state in northeastern Nigeria.

Boko Haram, as the group has been dubbed by other Africans and which means “Western education is forbidden”, stepped up attacks outside Nigeria over the past year, including in Cameroon, Chad and Niger.

The group has been fighting since 2009 to overthrow the government, which it regards as run by non-believers, and create an Islamic state.

The US designated it a terrorist group in 2013 and its current leader, Abubakar Shekau, pledged the allegiance of the group’s estimated 9,000 fighters to Isis in March last year.

One month later, the group kidnapped 276 female students from the town of Chikbok in Nigeria to use as “wives” and to terrify the local population. The majority have not been found.

Cameroon’s president, Paul Biya, has been leader of the country since 1982 and has one of the highest salaries among African heads of states as well as having been dubbed “one of the world’s worst dictators” by the Huffington Post.

Monday’s bombing was not the first time the town of Bodo has been targeted. At the end of December, two female suicide bombers blew themselves up at the town’s entrance.

Officials said at the time that the bombers were trying to access the market but were stopped by local residents. No others were injured in that bombing.

Two more female suicide bombers killed at least 10 people and wounded at least one other in an attack on a mosque in Kouyape in northern Cameroon, according to Al Jazeera.

Chad, Cameroon, Niger and Nigeria have all contributed troops to a regional offensive devoted to driving back Boko Haram, and the United States has contributed military supplies and troops for assistance.