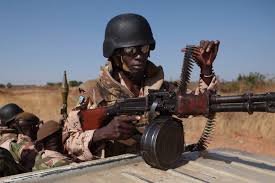 Four Malian soldiers were killed, the army said, in two separate attacks in the country’s desert north where an Islamist insurgency has re-erupted in recent months.

A military vehicle escorting a civilian truck convoy hit an improvised explosive device on the road between the northeastern towns of Gao and Gossi, the army said in a statement.

“Following this explosion, the Malian army lost three men in the vehicle and registered three wounded,” it said.

Earlier, military sources had said that one soldier was killed and a second injured when a truck taking water to outlying army positions was attacked at a checkpoint near the city of Timbuktu.

The Islamist insurgency that has simmered since French forces drove the militants out of major northern towns two years ago has flared up again recently with raids intensifying and fighters mounting daring attacks further afield.

Al Qaeda in the Islamic Maghreb, which operates in northern Mali, has claimed two major attacks on hotels that killed dozens, many of them foreigners, in November in Mali’s capital Bamako and this month in Ouagadougou, capital of Burkina Faso.