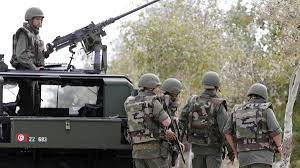 The soldiers were patrolling the area near the city of Kasserine when they were ambushed, said Col. Fouad Ahmad, the commander for the region. He told the Associated Press the number of wounded was not yet clear.

The mountainous area around the city of Kasserine has in recent years been a hotbed of extremists who descend from their mountain hideouts to attack soldiers and police.

The Al-Qaeda-linked Oqba ibn Nafaa Brigade is based in this area. They are the same group the Tunisian government has said was behind the March 18 attack on the national museum.

On March 29, police ambushed and killed nine members of the group near the southern mining city of Gafsa, including one of its top commanders, an Algerian named Khaled Ben Hamadi Chaieb, also known as Lokman Abou Sakhr.

Faycal Cherif, a security expert, told the Associated Press that Tuesday’s attack was likely in revenge for Chaieb’s death. The government has said he was the mastermind behind the museum attack.