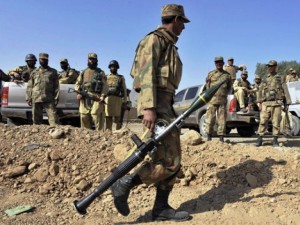 Four Pakistani soldiers have been killed and four others wounded in a rocket attack in the tribal area of Khyber Agency, bordering Afghanistan’s Nangarhar province.

According to the statement several rockets landed on a security post in Akhandwala Pass on Sunday, the press release claims they were fired from the Afghan side of the border.

“According to reports, rounds fired from Afghanistan side opposite Khyber Agency by terrorists hit a 8,000 feet high Pakistani post in Akhandwala Pass,”

The statement further states that Pakistani soldiers also responded to the attack.

“Pakistani troops befittingly responded and eliminated the group of terrorists,” the statement adds.

Afghan government has not yet commented on the report.