You are here: Home / Europe / Four muslims from east London in court on terrorism or firearms charges

A 25-year-old man from east London already facing five allegations involving acts of terrorism and a firearm charge has appeared at the Old Bailey on three more terrorism charges, like reported by eastlondonadvertiser.co.uk 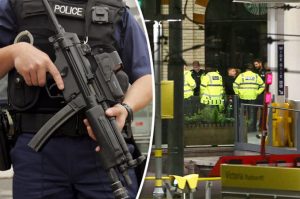 Umar Ahmed Haque, 25, was charged yesterday with preparing terrorist acts and two counts of disseminating terrorist publications and was remanded in custody for trial on January 15.

Haque already faces five allegations of preparing terrorist acts, four for of possessing information likely to be useful to committing or preparing an act of terrorism, and a criminal charge of conspiracy to possess a firearm.

A youth and two other men from east London also appeared at court yesterday for a pre-trial hearing on terrorism or criminal firearm charges.

They were 19-year-old Abuthaher Mamun, accused of preparing terrorist acts, Muhammad Abid, 27, for having information of acts of terrorism that might assist arrest or conviction of another, and Nadeem Ilyas Patel, 25, for criminal conspiracy to possess a firearm. All three have also been remanded in custody to appear for trial with Haque on January 15.