You are here: Home / Mediterranean / Four Libyan soldiers killed in clashes with ISIS 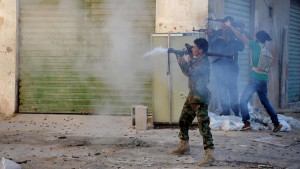 Heavy clashes broke out between Islamic State and army units loyal to the country’s official government near the eastern city of Derna on Friday, killing four soldiers, military officials said.

The conflict is part of chaos gripping Libya, which has fragmented into two governments and parliaments allied to former rebel groups that helped topple Muammar Gaddafi in 2011.

Islamic State, which has exploited a security vacuum in the oil producer, has had a base outside Derna, a traditional jihadi hotspot, since a rival group kicked it out of the coastal city in June.