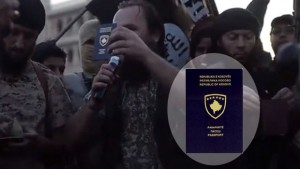 Four Kosovo citizens, are suspected to have joined terrorist organisation ISIS during September, at the time when Kosovo authorities were claiming that no Kosovo citizens joined foreign conflicts over the last eleven months. They traveled through Montenegro, and one of them is considered as a fugitive of justice. The news puts into question success of Kosovo institutions in preventing its citizens join terrorist organisations.

Four Kosovo citizens are suspected to have joined ISIS. Amir Vuniqi, Egzon Iseni, Rron Emini and Irfan Haiqi, have allegedly fled Kosovo in early September, and joined terrorist organisation in the Middle East. The four citizens have been under Kosovo authorities surveillance for their connection with radical elements within Kosovo. Irfan Haqifi, can be even considered a fugitive of justice, because he was facing terrorism charges, and authorities have ordered house detention order.

The four young people coming from different regions of Kosovo, reportedly have found an alternative route to to Syria, traveling through Montenegro, other Balkan countries, East Europe, Turkey to their final destination – Syria. reportedly the leader of the group is Amir Vuniqi, from Pristina. Kosovo authorities are aware of the case. The Kosovo Police confirmed to Gazeta Express that they are informed that a group of four people has left Kosovo and joined terrorist organisation ISIS in Iraq and Syria.

“The Kosovo Police is dealing with the information that four Kosovo citizens have travelled to Turkey through third countries (neighboring countries). Based on the information we possess they are suspected of joining conflict zones in Syria,” the KP press office told Gazeta Express.

Kosovo Minister of Internal Affairs in all his public appearances stated that no Kosovo citizens joined ISIS over the last eleven months, and he commended the police and security institutions for fighting terrorism and preventing Kosovo citizens to join terrorist organisations. According to latest data of the Kosovo Police Anti-terrorism Unit, around 140 Kosovo citizens are currently in Syria.